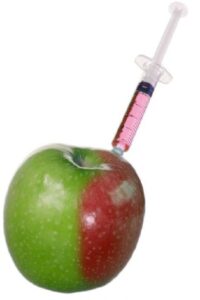 With the month nearly over, you may not have realized that October is GMO month. A very controversial topic, Genetically Modified or (also known as Genetically Engineered) crops are becoming increasingly abundant in ingredients of common foods without your knowledge. How common you ask?

Based on USDA (US Department of Agriculture) data, it is estimated that GMOs are now present in more than 80% of packaged products in the average U.S. or Canadian grocery store.

According to the USDA’s figures for 2009, 93% of cotton, 93% of soy, and 86% of corn grown in the U.S. were GMO. It is estimated that over 90% of canola grown is GMO. Other commercially produced Genetically Engineered plants include varieties of sugar beets, squash and Hawaiian Papaya.

With corn products (primarily high fructose corn syrup) being present in everything from soda to salad dressing, you may be consuming more GMO foods than you think. But is this a bad thing? According to the FDA (Food and Drug Administration), it is perfectly fine, and they are the ones who are protecting our food, aren’t they? Depends on if you believe GMOs should be proven safe for us, or by us.

See, the FDA has taken a ‘wait and see’ approach to GMO foods, essentially, the public at large are the guinea pigs for this food experiment. Many other countries, including Australia, Japan, and all of the countries in the European Union, have decided they will excuse themselves from this experiment and wait to see how we turn out before lifting their restrictions or bans on production of GMOs.

For all we know GMOs may be perfectly safe, the problem is there has been no real science investigating these products other than those put forth by the producers of GMO products. Unfortunately, because of the lack of any kind of labeling, the only real way to know if you are avoiding GMO foods, is to eat organic, but hopefully that will change with more people becoming aware of the extent of GMO products in their foods. To find out more about GMOs and see both sides of the issue, visit the Non-GMO project or check out WholeSoy’s Take Action Guide, and for an alternate view, one of the largest producers of GMO products, Monsanto’s GMO page.