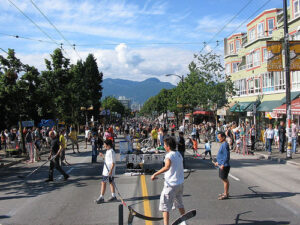 Heads up all Vancouverites and nearby Canadians! I know you’re probably all pretty tired out from the winter Olympics and the traffic related joys that inspired, but guess what? Something arguably even better is coming to town. June 20th is the official Car-Free Vancouver Day! It’s pretty simple. Don’t drive anywhere. Take an entire summer Sunday off from cars. Instead, use public transportation, ride a bike, or just walk. Cut that (key)chain tying you to your car and join in the festivities.

Vancouver’s annual Car-Free Day was officially launched in 2008 following a number of successful smaller events in the years before all building up to this celebration of healthy communities, authentic cultural festivals, and most of all, car-free streets. The 2009 Vancouver’s Car-Free Day tempted over 150,000 people to join in the fun and to take the day to look at their city in a new light. With great available public transportation and pedestrian friendly streets, it’s no surprise that this idea has taken off.

Powered entirely by volunteer efforts, this event is truly an inspirational example of communities, even large and diverse ones such as Vancouver, coming together in support of a cause they are inspired by. Opportunities to volunteer range from coordination, support, street performing, vendors, non-profit organizations, outreach, promotion, donations collection, etc. No matter where your skill sets lie, there’s a “Pod” or volunteer group that can put you to great use. As of a month before the event, there are four festival locations planned for 2010: Commercial Drive, Mainstreet, West End and Kitsilano, each with it’s own flair and festivities.

This is an idea I’ve come across before in Europe. The World Carfree Network, of which Car Free Vancouver is a member organization, has put on car free days in a number of locations around the world. The WCN “brings together organizations and individuals dedicated to promoting alternatives to car dependence and automobile-based planning at the international level and working to reduce the human impact on the natural environment while improving the quality of life for all.” Most of their events take place on September 22nd, giving the world a set date to get together with their communities to remind the world that there is such a thing as life without cars. 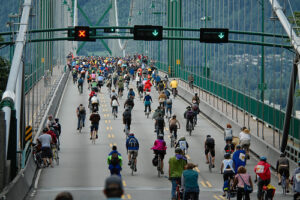 In the light of the month long (and still counting) oil-geyser (let’s just admit it’s more than a spill) in the waters of the Gulf of Mexico, as well as (let’s not forget) the ever looming storm cloud that is Climate Change, our dependency on fossil fuels is doing us more harm than good. So if you’re in or anywhere near Vancouver, British Columbia on June 20th – take a break from your car, even if it’s a hybrid, just to show the world, its businesses, policy makers, and ourselves, that we still can.