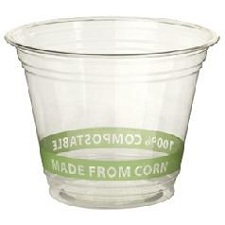 Corn plastic, otherwise known as polylactic acid (PLA), is rapidly replacing traditional petroleum based plastics for food containers, utensils, disposable cups and more, but how do you dispose of it? It is common to find a recycle symbol printed or molded into the container, and many also promote that the item is compostable or biodegradable. So what is the most eco-friendly way to dispose of this new generation bio plastic? The answer may depend on which does less harm and very well could be the trash can.

Composting Bio Plastic
There are few facilities equipped to fully compost PLA down to carbon and water. The process to breakdown PLA cups is approximately 30–45 days in a commercial compost facility with a sustained temperature of 140 degrees for 10 days. Most people have had mixed results with backyard composters, some taking months, others even years, much related to sustained heat.

Nationwide, there are only 115 or so industrial composting facilities capable of such a task, and only a quarter of them accept residential foodscraps collected by municipalities. Those that do see PLA may be in for a bigger problem.

Large amounts of PLA can interfere with conventional composting because the polymer reverts into lactic acid, making the compost wetter and more acidic. Currently it is not an issue because there isn’t enough PLA to cause a problem, but in the future, composting facilities will have to convert over to anaerobic digesters.

Recycling Bio Plastic
Similar to the composting issues, recycling facilities that are able to accept PLA are limited. Currently (as of this publishing) there is only one major recycler in the US equipped to regularly handle PLA. There hasn’t been a big enough demand and volume of PLA for most recyclers to create a waste stream specific for bio plastic PLA and it is currently marked under ‘other’ or mixed resin #7 recycling code.

Another common issue is cross source contamination and from poor sorting. Bio plastic PLA cups don’t recycle well with traditional polyethylene (PET) due to the distinct chemical makeup differences. When petroleum-derived plastic is found ‘contaminated’ with PLA (or vice versa), part or the entire load of plastics are discarded rather than recycled.

Of course there is also the larger debate as to whether these corn based bio-plastics are really better for the environment than the alternatives. Most is created from genetically engineered (GMO) corn, which has it’s own implications. Additionally, the cultivation of corn uses more herbicides, insecticides and nitrogen fertilizer than any other U.S. crop; all which contribute to soil erosion and water pollution for our lakes and rivers.

So, what is your best option? First, check to see if there is a industrial composting facility in your area (within California, outside of California) and find a pickup location. Many residential communities are beginning to provide composting pickup services along with trash and recycling.

If these are unavailable to you, check with your local recycler whether they accept bio plastics (typically listed as recycle code #7). If not, unfortunately your only option may be the trash.