I have always been fascinated with photography, its ability to tell a story in a single frame. Sustainable and environmental photography hardly ever gets its place in the spotlight, mainly because the images can be so graphic or disturbing that nobody wants to put them on their wall at home. Chris Jordan may be one of the only exceptions in this case as he is known for impactful, but artful photographic montages.

Chris Jordan has been on my radar for some time now, even before his photographs of millions of plastic bottles. Being a photographer myself (West|LaCount Photography) and given we both live in Seattle, WA – word gets around. His popularity has grown since converting what were once only statistics and numbers into visual representations so our minds can better quantify our impacts.

His latest photographic adventure, Midway – Message from the Gyre, is one of my favorites. Traveling to Midway Atoll, one of the remotest islands on earth, he set to show us how far reaching our impacts can be. Located in the North Pacific, halfway between the U.S. and Asia, he tells a story- a story of plastic. Home to over 1.5 million birds including colonies of Albatross, Frigate birds, Boobies, and Terns; it is also near the apex of the Pacific Garbage Patch. 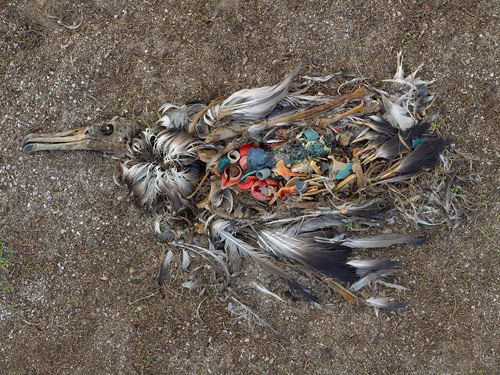 “The nesting babies are fed bellies-full of plastic by their parents, who soar out over the vast polluted ocean collecting what looks to them like food to bring back to their young. On this diet of human trash, every year tens of thousands of albatross chicks die on Midway from starvation, toxicity, and choking.” 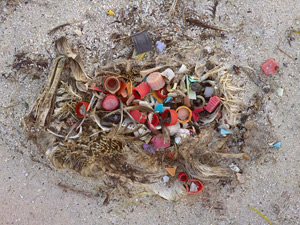 The images are truly shocking, but they are quick to point out that they followed a strict code of ethicsand there was absolutely no alteration to the photographs, the birds themselves, or placement of plastic.

Each photograph depicts the actual plastic contained in the birds stomach at the time of its death, as it was when it died. All of the images can be seen here.

You can follow the teams journey and updates on their Midway blog.

All images courtesy of and © Chris Jordan