I was walking around the South Lake Union area of Seattle when i happened across a pretty little fueling station named Propel. It had a green roof, planters and educational interpretive signs like something you might find at a wetland or bird observation area. It looked more like a grade school garden experiment funded and built by green design architect parents. It changed the way i looked at biofuel and biodiesel stations. I was used to the more home-grown bio-diesel stations you find in Berkeley, or the backyard cookers. The ones that are old, kind of junky and funky, but at the same time give you that community grass-roots-type-action feeling. 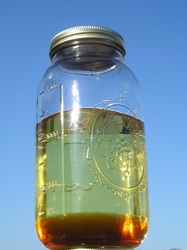 The whole idea of biofuels has been around for a long time, and even the inventor of the diesel engine was a huge proponent of using vegetable oils as a fuel for his engines (peanut oil was considered to be the bio fuel of the future back in the 1900’s – today its corn and soybean oil). Along with the oil boom came a cheap (and fairly dirty) source of fuel that we know as diesel. While they actually have lower CO emissions, they do produce particulates and soot due to the low temperatures at which the fuel burns. That is why you see thick dark smoke you see bellowing from trucks, buses and construction equipment. Much of this can be reduced significantly by using biodiesel with the best biodiesel fuel rating being B99. With the ‘B’ ratings, the number following the ‘B’ is the actual percentage of refined vegetable oil mixed in with the petro-diesel. Thus, the higher number, the greater percent of vegetable oil is in the fuel, and the better it is.

Flex Fuel is for gasoline cars what bio diesel is for diesel engines. Sort of. It is not for all gasoline powered autos, your car must be built to handle this type of fuel. The mix is generally 85% Ethanol, which is predominantly derived from corn, and 15% unleaded gasoline. Ethanol is added to most gasoline to some extent, but your car must be equipped with special equipment to utilize the high percentage found in Flex-fuel. Switch grass is a emerging alternative to corn, as is agricultural waste and hopefully will become the next generation ethanol producing alternative.

Where this can bump into some resistance is when it comes to producing these biofuels on a large scale to feed our enormous appetite for fuel. The worries boil down to huge monoculture crops being planted, reducing diversity and opening us up to bio infestations (think elementary schools and the Flu virus, but worse) which could potentially devastate crops and production. Additionally, bio engineered crops (genetically engineered or GMO) are emerging as ‘super crops’ and are created to be more resistant to potential threats. These lead to further issues such as cross-pollination with traditional or organic crops, undesirable properties being added such as ‘suicide seeds’, and the unknown effects to the environment (some bio engineered crops have been found to be harmful) and humans.

Algae culture for use as a biofuel

With the current state of infrastructure, it seems that bio-fuels might be the best fit as we transition to alternatives such as electric cars or fuel cell vehicles. Perhaps with new culturing techniques and new bio-fuel sources (algae is currently under development as a high quality biofuel), this may be our future. Now if only we could do a bit better in the emissions department…