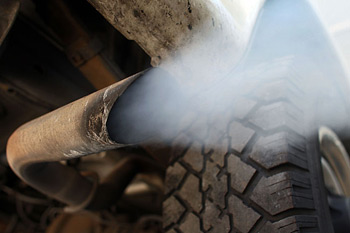 There has been a lot of news about the Car Allowance Rebate System or ‘Cash for Clunkers’ program, but the real question is will this benefit the environment? Conceived as a two-birds-with-one-stone program to boost our economy and remove older polluting cars from our roads, but is it working? The real answer is that we don’t know yet.

The original program developed by Senator Dianne Feinstein, Democrat of California and Senator Susan M. Collins, Republican of Maine, required bigger improvements in MPG to qualify. Luckily it seems “the good judgment of the American people” has proved to exceed even the original requirements.

Transportation Secretary Ray LaHood said the average mileage of new vehicles purchased through the program is 9.6 miles per gallon higher than for the vehicles traded in for scrap. Buyers of new cars and trucks that get 10 mpg better than their trade-ins get the $4,500 rebate. People whose cars get between 4 mpg and 10 mpg better fuel efficiency qualify for a smaller $3,500 rebate.
–Associated Press

We should stop and recognize, however, that Miles Per Gallon (MPG) is not a very good indicator of actual fuel efficiency, especially at higher numbers. Look at the table below, and you can see that if you traded a car that got 40 mpg in for one that got 50 mpg, you would qualify for the higher rebate, however, it would be less efficient (less of an environmental impact) than moving from a 20 mpg car to a 25 mpg car.

The good news is that it looks as though the mpg gains are at the low end. With 80 percent of the traded-in vehicles being pickups or SUVs, many gas-guzzlers are being taken off the road and being replaced by more efficient compact cars such as the Ford Focus. Not only does this program reduce fuel consumption, it also reduces CO2 (carbon dioxide) and other global warming causing emissions. How much? Approximately 3.8 million barrels of oil per year and 660,000 metric tons of carbon dioxide emissions a year from the replacement of a 15 mpg car with a 25 mpg car.

The ‘clunkers’ are also permanently removed from the road to be recycled rather than sold or shipped to the developing world further decreasing the number of inefficient automobiles in the world.

All told, the plan looks as if it will be a success for the environment, the economy and the consumers wallets. Now if we could only get a recycling program for people who just want to get rid of their cars for good!

Resources:
Real world fuel efficiency
Does your car qualify as a ‘clunker’?
Calculate your MPG