A great campaign by the World Wildlife Fund to promote energy conservation and awareness on a global scale, Earth Hour takes place around the globe for a single hour on Saturday, March 28th, 2009. It happens to be at 8:30pm (PST) here in Seattle, WA – just visit the site to see what time it is in your area.

The Nation’s Capital Joins 950 Cities Around the World, Including Paris, London, Hong Kong, Rome, Beijing, Nairobi and Moscow, in Historic Call to Action on Climate Change. Check out what other icons will also be supporting this action:

I have been a longtime fan of WWF, although many here in the states associate it with showman wrestling, I was first introduced to the organization when I was living in the United Kingdom. World Wildlife Fund is more well know in Europe, although they provide immense support to the US as well. One of the highest rated charities around, it is comparable with the Sierra Club here in the states, with their focus primarily on endangered species. 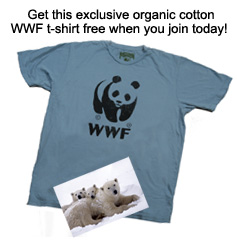 I couldn’t help show off their new T’s as well as this is an Eco-Chic blog. Made of organic cotton with their trademark panda design, its pretty sweet. They are giving them away with any donation, and are well worth it!