Society has seen a quick adoption of reusable grocery bags, especially with legislative measures in their favor in several cities/states/countries  (like Washington DC and the Republic of Ireland). This progressive adoption is understandable on at least three counts outside of these two places as well. Firstly, as these bags are convenient for grocery stores, which in turn will save money on paper and plastic bags. Secondly, as they’re also convenient for shoppers who no longer have to hope the bag boy didn’t over-stuff the flimsy plastic/paper bags they would normally use. And finally, convenient for the environment as it results in less dependency on plastic bags which would to take millennia to biodegrade. 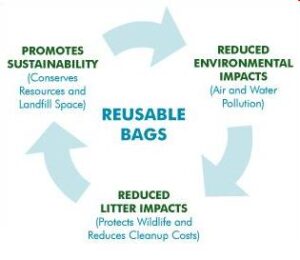 The quick spread of these bags comes at a cost though as the people adopting them aren’t properly informed as to the measures they’d need to take in order to safely use them. They’re bags, is there really anything non-intuitive about their use? It seems that there is. They’re meant to be washed on a regular basis, but the people who purchase them don’t seem to be aware of this fact by far as a recent study indicates that as much as 97% of randomly selected interviewees were completely unaware of this health precaution.

Likewise, it was found that only 25% of people packaged meats and vegetables separately when they used these bags. Recalling my own days as a “courtesy clerk”, we were always rebuked if a manager (or an experienced checker) saw us accidentally mixing certain types of food by placing them into a single bag. A less disturbing statistic was the fact that 30% of the people were using the bags for something other than groceries (such as carrying books), which sounds just fine out loud, but comparatively if you were to ask yourself whether or not you’d put food in your backpack without a paper-bag or something, most likely, you’d say no. Some people also used their bags not only for books or groceries, but even for bicycle supplies. The authors of the study even felt it important to warn against using the bags, in which you place your food, for transporting gym clothes.

The above-mentioned statistics, and the nature of the overall findings of the study suggest that the primary cause for concern is a lack of education. Dissemination of this knowledge is an inherent responsibility for the grocery store chains for whom these bags are most profitable, though out of concern for public safety, the authors of the study have also encouraged “public services announcements and health advisories.”