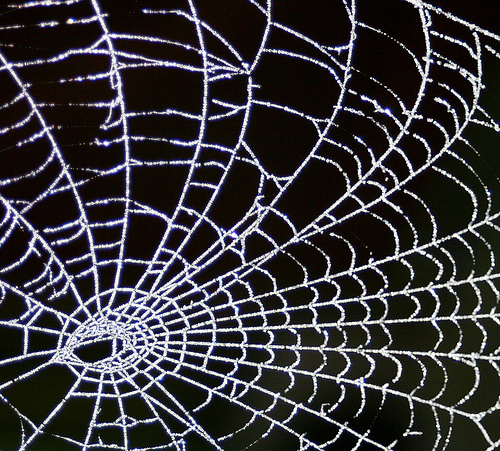 While thinking about and writing my posts on natural groceries and organic delivery services, it came to my attention that the concept of food is not inherently an environmental issue in the minds of many people. I’ve got to admit that this kind of blew me away. To me, food is so essentially an environmental issue that to not think of it that way is to ignore huge aspects and linkages within environmentalism. Think of the vegetarian and vegan movements. Think of organics. Think of sustainable agriculture and waste reduction and prevention. The environment and all its issues are like a giant spider web, and right there in the middle, where all the threads intersect, is food.

When people think of being green, of acting environmentally responsible, they think of recycling, of using reusable shopping bags and water bottles. They might even go so far as to think of using public transit or even riding a bike to work. Let’s be honest, a lot of people just think politics and then tune out. When people think about food, they think of what they like to eat, what their family likes to eat, the price of the food, and maybe even what’s healthy.

But there is so much more to it than that. Let’s break it down.

Toxins and Pesticides: Now this is as much an environmental issue as it is a health issue. In fact, it is only a health issue because it is an environmental issue. If it didn’t eventually come back to harm people, families, kids, communities, frankly a lot less people would care. Of course Rachel Carson’s Silent Spring was one of the first widely available testaments to the harm done by pesticides, igniting the public and sparking the environmental movement, it is the harmful effects of pesticides and toxins on human life that has led to legal actions and thus policy. The very mission of the United States Environmental Protection Agency is to protect human health and the environment. Human health will always come first. But recognizing that they two are intertwined is essential to understanding the issue. What we put into the environment, in this case in the form of toxic chemicals and pesticides, eventually comes back to us, through our food.

Locally Sourced Products: You’ve heard it before: think global, act local! Here’s where it comes into play in terms of food. Acting local, in part, means being an active consumer within your local economy, not just local stores, but buying locally sourced products. The farther your food has to travel to get to you, the more of an environmental impact you have on the planet. Fresh fruit and produce are shipped into the country every day, each shipment emitting CO2 and other greenhouse gases which have a direct effect on the environment. Consider buying seasonal produce instead, or take a wander around your neighborhood farmer’s market. Where your food comes from should be something you are aware of, as it has as much of, if not more of, an impact as what car you drive or how often you fly.

Waste: It really is amazing how much waste is produced by a normal sized household. I’m not just talking about food waste here, but also packaging. As the majority of it all is neither recyclable nor compostable, or if people bother to recycle or compost for that matter, the amount of garbage building up in landfills is frankly intimidating.

Vegetarianism: This is one of the most basic environmental issues, for a number of reasons. Firstly, there is the element of animal cruelty and the moral conundrum of being a meat eater when it is ecologically more feasible (going by caloric content) to feed the planet on a vegetarian diet. Also considering the amount of toxins and greenhouse gases produced by large cattle farms, it is impossible to ignore the impact our choice to eat meat has on the environment. Veganism, of course, follows in much the same vein.

These are just a few examples of why food is an environmental issue. There are plenty more, but I’ll wrap this up by saying that today, as the demand for more natural, more sustainable, and more environmental products has increased, so too has the supply. As such, the understanding of food as an aspect of green living has become more prevalent. Just look at the products available that have been talked about on this site; green beer, green chocolate, green liquor. Even complete hedonism isn’t an excuse not to green up your food consumption.