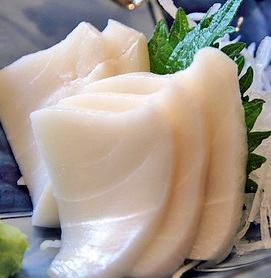 This has recently hit my radar, being a sushi lover and all, because of the very surprising ‘leakage accidents’ which are associated with a certain fish. Escolar (Lepidocybium flavobrunneum), or as it is commonly (and mistakenly) referred to as butterfish, super white tuna, or sometimes walu/waloo, can have a nasty side effect if too much is consumed. Besides that, I was also interested in the sustainability of this fish, since it is quite delicious and common in US sushi restaurants.

Escolar has been popping up on menus all over the country, but you find them primarily in sushi restaurants because of their reasonable price, low mercury content, and delicious texture and flavor. This type of fish cannot metabolize the gempylotoxin wax esters common to its diet of squid, crustaceans and other fish, leaving them to accumulate in the muscle tissue. These wax esters are left in the flesh of the escolar causing gastrointestinal problems when consumed in large amounts (more than a single serving size of 6 ounces for most people), or to put it bluntly, unexpected and uncontrollable oily orange rectal discharge. Because of this unexpected side effect, many countries have banned its sale, including Japan and Italy, while others require clear labeling and identification of the fish. It was actually banned in the US until 1992 when the FDA lifted the ban, concluding the fish was not actually toxic- it only had unpleasant side effects.

As to its sustainability, unfortunately it hasn’t been added to the Seafood Watch Guide at the time of this article, but the information out there currently is cloudy, if not troubling. Escolar is commonly a bycatch of tuna longlines and is not regulated outside of US waters for sustainability. This means most of the International sourced escolar is from un-managed sources and destructive fishing practices. So not the best choice unless you know where it came from.

Although delicious, keep it under six ounces and sourced from US waters, and you may avoid intestinal (and environmental) discomfort.