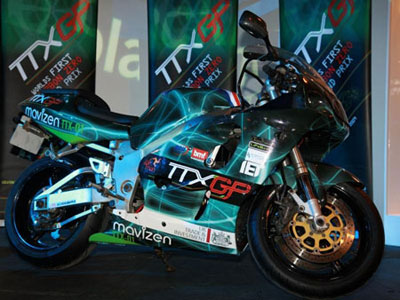 One of my favorite modes of transportation just got better. I’m a pretty big street bike fan- all that fun and an average of 56 mpg ain’t bad! But now it can be even better.

Based on the Suzuki GSX750 frame, the TTX01 is the fastest electric street superbike to date. The Vectrix (pictured below) is a close competitor, but its unclear if they will produce a production model. With a top speed of 125mph and a 50mi range, the TTX01 electric motorcycle technology leaves a bit to be desired, but progress is being made. There are several other electric bikes/moto-scooters out there, but this is the first i have seen (that is not a one off custom or a prototype) that has that street bike appeal.

The TTX01 uses two 43 bhp Agni Lynch electric motors on the rear wheel providing the power equivalent of a 600cc gasoline powered motorcycle, but they also added a motor to the front wheel as well which is said to improve handling. A two wheel drive motorcycle, how odd, but possibly awesome. The bike is lightened with the help of a carbon fiber frame and lightweight components allowing for the 0-60 time of 3.5 seconds.

To get a view of this bike, and several others like it, check out the world’s first clean emission Grand Prix to be held at the Isle of Man during TT race week in June 2009 which should showcase some fast new electric bikes. If you like fast and electric, you may want to checkout the Wrightspeed X1 electric supercar.