That sounds corny, right? It gets worse though. I almost said that as a response to somebody at a bus stop asking me if I had the time. It wasn’t without reason though, and it’s not as if absurd environmental phrases are constantly running through my head. The real reason is that I have a fairly decent-sized assortment of watches for somebody on a college student budget. Occasionally, one of them stands out – like today. A friend of mine, after noticing it and passing a quick compliment, noting my interest in green technology, suggested I check out a series of watches from the Citizen brand. 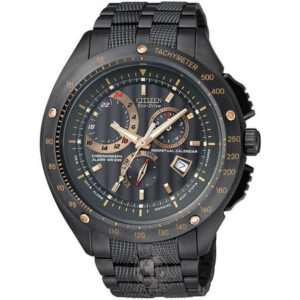 was never a believer when it came to solar-powered watches. Self-winding watches perform a relatively similar task albeit with some inaccuracy and cut the battery out of the equation completely. But it’s not that I thought this long-existent technology wasn’t feasible, I simply hadn’t heard much in terms of innovations in the market so I was never reminded about it and didn’t have enough initiative to give it much thought. The technology is relatively simple as these watches use solar panels not unlike those found in other common items like solar-powered calculators, the only difference being that a much greater amount of energy is than stored. I continued to be a skeptic though. I had always felt that these watches wouldn’t be at par with the ones I already owned. An inflated ego from a minor compliment and an all-to-human feeling of having to reciprocate for it forced me to give this concept some more thought and take the advice.

[ad name=”Go-MM-LgSquare”] In under a few minutes of browsing the Eco-Drive series as well as a variety of other brands functioning under the same premise, I felt many of the watches in my collection being put to shame. Not necessarily always in terms of style, but with respect to the idea of being able to cut my ecological footprint that my conscience kept weighing in on me with. In a world where every portable electronic device, in spite of it’s actual purpose, also tells time, my watches are fast becoming more of a luxury item than something particularly useful. So the upkeep costs are becoming more and more senseless, even though I generally only have to replace the batteries every couple of years for each one. I had never actually considered the possibility that companies may have been producing such tasteful solar-powered watches. Now that I have, I’ll soon be able to say: not only do I drive a hybrid, I also happen to wear one.